The magic of mosaic fishponds

It began with a blank canvas

In 1996 the London Borough of Croydon approached us for small two metre diameter mosaic with a brief that I have never had before “Do what you think will be best”. It was actually one of the hardest briefs I’ve ever faced where to start with a blank canvas? I didn’t realise at the time that the simple trompe l’oeil mosaic fishpond design I came up with would set off a long trail of depicting ponds in mosaic.

There is something magical about working on a floor mosaic which represents the surface of water. The surface is so complex, continually moving, sometimes opaque sometimes transparent, it reflects, distorts, casts shadows and changes colour, it is a surface that is simultaneously there and not there. Representing this complexity in the complex but totally different medium of mosaic is challenging but also offers the mosaic maker great freedom in the translation into the free flowing Andamento of mosaic art.

The success of the Fishpond Mosaic in Croydon was a surprise, it quickly won awards and has since been widely featured and commented upon and I was set off on a path of creating water in mosaic.

The pond that changed everything

Then in 2000 myself and Rob Turner, my then business partner as Wallscapes, were asked to created a mosaic fishpond that changed everything. Landscape Design Associates commissioned us to create a nine metre diameter mosaic for Southampton East Park working to a design by printmaker Caroline Ishgar which was itself inspired by the Croydon design. The reason this design changed because until now we had designed mosaics that we knew we could make, we had used palettes of colours we knew we had and drawn our designs with the knowledge of our skills base. Caroline’s design took no notice of these restrictions and in trying to grapple with these difficulties we found our technique and understanding of mosaic took a giant leap forward, suddenly the surface of the mosaic came to life as we struggled to interpret the marks in the design.

Going back to nature

My next step forward in the exploration of water in mosaic came from a small private commission for a garden mosaic. The clients had seen the Croydon mosaic fishpond and like many had enquired about one for their garden. I felt I was in danger of getting into a rut reproducing the Croydon design and thanks to the clients faith in me this time I went back to nature. I began by sketching and painting real koi ponds and this groundwork enabled me to create a new design which focused more on the movement in the surface of the water.

Continuing the development and exploration of mosaic fishponds, the next commission for Carterton Town Council in Oxfordshire brought together the surface movement of the previous work with the shadows of the original mosaic. 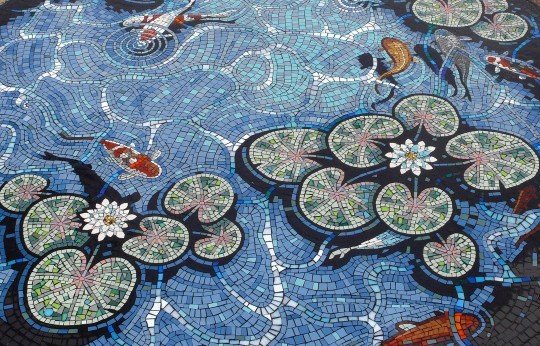 Turning to the opaque waters of the Rhynes

A major commission in 2009 for Weston-super-Mare in North Somerset presented a new challenge. The idea was to create a triptych of floor mosaics which represented the local flora and fauna, a particular problem was how to represent birds on a floor mosaic. The answer came in wondering around the local canals (rhynes) which drain the Somerset levels. The Rhynes are an important feature of the local landscape and within their reflected surfaces I could see birds in the air and the plants around them. So a new dimension was added to the pond mosaics.

Turning water in an allegory for life

The next major commission for the University of Iowa took the portrayal of water in mosaic in a different direction, this time as an allegory of life. In this mosaic river of life which runs its course from birth to death each course of tesserae are seen as a life line. The lines flow along the river, weaving and bending through a symbolic landscape of Native American, Amish and local basket weaving patterns, the golden section representing a life in balance with nature.

There is still so much more to explore creating water themed mosaics, I feel I still have a long way to go. Each new commission opens up new challenges and ideas and more importantly the enjoyment of creating the surface of water in mosaic is still full of joy and passion. Some ideas yet to be realised include making a trompe l’oeil bottom for a swimming pool, and creating a waterfall down a wall. At the moment I am working on tide pool mosaic for a children’s hospital where the trail of mosaics will act as a discovery exploration for the children finding the hidden plants and animals of the seashore.

Who knows where it might lead in another ten years…

Discover how to create your own beautiful koi pond mosaic with my affordable online course. Learn all the skills and techniques you need to make your own mosaic artwork.

A great starting point for anyone looking to learn the art of mosaic making at an affordable price. In this new online course you will 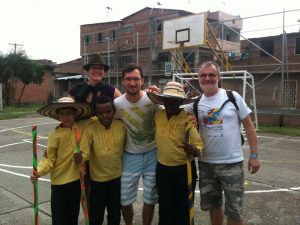 London Design London is a hothouse for creative talent. It has a world leading rich cultural life and a vibrant arts scene. Born in London, 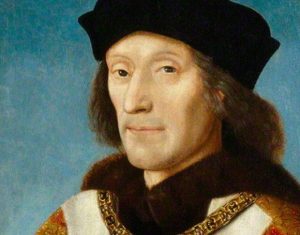 A sundial memorial to the Battle of Deptford Bridge

On 16th June 1497 Micheal Joseph, a charismatic blacksmith known simply as An Gof, gathered a Cornish army on Blackheath in south east London. After the long march