A guide to the Dartford Industrial Heritage Mural

The Dartford Mural Guide – This is a guide to the imagery and it’s meaning for the gable end mural on Dartford’s High Street at One Bell Corner.

One Town That Changed The World

“One Town That Changed The World” – Dartford’s Industrial Heritage Mural was commissioned by Dartford Borough Council in 2000 for the millennium celebrations the mural was designed by Gary Drostle and painted by Wallscapes artists Gary Drostle and Rob Turner.
The mural depicts the industrial heritage of Dartford through the ages and includes many world changing developments, Gary spent many hours researching the amazing local history of innovation and industrial development of Dartford, so here is the Dartford Mural Guide complete run down working roughly clockwise from the top left corner:-

1. Portland Cement Works – Beehive and Bottle Kilns, First developed by Joseph Aspdin in the 19th century and subsequently by Issac Johnson at Swanscombe in 1847. The local cement industry grew into Blue Circle PLC.

2. Denehole Chalk Mine – Deneholes are shafts dug during the medieval period in order to extract chalk. This was them spread on farmland. The miners would climb down the shaft using footholds in the shaft walls and windlass to raise the chalk.

3. Godfrey Box’s Wire Slitting Mill – Godfrey Box set up his Iron Slitting Mill in 1595 to cut bars of iron into long square rods, which could then be drawn out to make wire. Box was from Liege where iron slitting had been established in 1580’s.

4. River Trade – Dartford’s location on the Thames with the freshwater from Dartford Creek made it an ideal location for many early industries.

5. Medieval Monk – Dartford was an important station on the pilgrimage to Canterbury. Dartford Priory played a significant part in the local economy owning large amounts of land and producing goods, wine and beer.

6. Spilman’s Paper Mill – Sir John Spilman, a German migrant from Lindau, set up the first commercially successful paper mill in England for producing white paper in 1588. In 1589 he was granted the monopoly on building paper mills, producing paper and buying rag and paper for recycling. He used an image of a jester’s hat as his watermark and company logo giving rise to the term ‘Foolscap’  for this type of paper.

7. Spritsail Barges – The Thames Barges were an iconic view on the Thames, transporting goods from Kent and Essex into London.

10. Donkin’s Cannery – Bryan Donkin was apprenticed to John Hall of Dartford in 1792. He went on to play a leading role in the world’s first food canning factory in 1811. This major advance revolutionised long term preservation of foodstuffs.

11. Lighting the Gas Lamps – Dartford was one of the first towns to use gas light in it’s streets and homes. The Dartford Gas Company was founded in 1826.

12. Applegath’s Vertical Printing Machine – This machine revolutionised the speed at which newspapers could be printed when it appeared in the 1840’s. Applegath ran silk and calico printing works.

13. Applegath Banknote Experiment – Applegath also developed a six colour printing system for the Bank of England to produce paper money from 1818 to 1821, however the system was eventually rejected.

14. Marshall’s Dandy Roll – An advert for a devise for producing a watermark on continuous run paper in around 1826.

16. SS Selembria – The Times ran an article in 1886 regarding the transport of 30,000 frozen mutton carcasses from the Falkland Islands to Britain. The ship was fitted with pioneering cold air machines manufactured by J&E Hall Ltd. The entire cargo arrived in perfect condition, the beginnings of the international import and export of chilled and frozen foods around the world.

17. Entertainment Poster – A 19th century poster advertising the presence in town of a sailor who claimed to have become a Maori Chieftain on a trip to New Zealand. The poster depicts him with traditional Maori tatoos.

18. Hazeline Snow – Manufactured by Burroughs Wellcome Hazeline Snow was produced in Dartford from 1892 until 1970 to ‘whiten’ dark skin. It is still made in South East Asia.

19. Freeze Dried Blood – During the Second World War J&E Hall perfected the equipment for the freeze drying of blood. It was one of the earliest uses of the freeze dry technique and enabled blood to be easily transported and distributed at the front.

20. Harvesting medical plants – Women picking belladona (Deadly Nightshade) and digitalis (Foxglove) – Burroughs Wellcome Medical Farm. The Materia Medica Farm on Dartford Freshwater Marshes around 1904. A variety of plants were grown from which compounds could be extracted.

22. Maxim’s Flying Machine – Hiram Maxim pictured talking through his plans for a heavier than air flying machine at his experimental plant in what is now Bexley Hospital. On 31st July 1894 his steam powered flying machine successfully flew 100 feet.

23. Richard Trevithick working on his locomotive – Richard Trevithick designed the worlds first railway locomotive The Catch Me If You Can in 1808. He worked in Dartford from 1832 after being invited by J&E Hall. Unfortunately he died a year later whilst staying at the Royal Victoria and Bull Hotel and is buried at St Edmund’s Pleasance.

24. Vickers Vimy engine  – Vickers Ltd tested aircraft on Dartford Salt Marshes between 1911 and 1919. The Vimy was used by Alcock and Brown for their first non-stop transatlantic flight.

26. Edward Mills ‘Bouncing’ Bombs – Although never used these bombs were designed in WW2 were intended to roll like Mexican Jumping Beans into what were mistakenly believed to be V1 launch tunnels.

I hope you enjoyed the Dartford Mural Guide and have found the industrial history of this Kentish town as fascinating as I have. As you can see this really is ‘One Town That Changed The World’

If you would like to see another heritage mural take a look at these:- 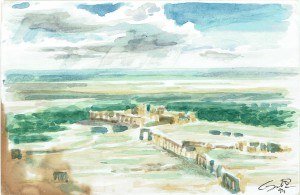 Remembering a different Syria – sketches of Syria by Gary Drostle

Today our media is filled with images of horror and desolation when it comes to Syria. The awful destruction of war and the resulting human tragedy

London Design London is a hothouse for creative talent. It has a world leading rich cultural life and a vibrant arts scene. Born in London, 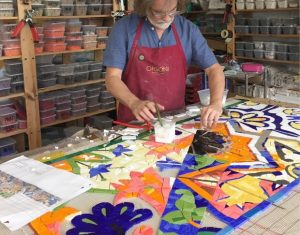 Mosaics in Gardens, a perfect partnership: Drostle mosaics at the Chelsea Flower Show. Although still not in common use in gardens, mosaics offer many benefits